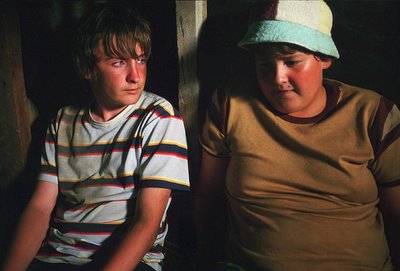 The Astor is the perfect place for a glamorous party with slightly fewer people than were present last night; it was a bit too crowded to be comfortable.

The head of publicity for new naming rights sponsor Volkswagen was a lousy public speaker.

Until the current festival board and administration change, the festival is not going to change their model for their opening nights. As it is the emphasis is on the party, not the film, so consequently second-rate films continue to be screened on opening night because they suit the ambience the festival are aiming for. When I was a member of the MQFF programming committee I argued that this was a mistake, and I still believe it to be the case. People who attend the opening night and little else (and many of the media/sponsors/schmoozers do just that) walk away with a bad impression of the festival because they watch a B-grade film. The festival should start with a stronger film, to remind people that this is a screen culture event, not just another bloody excuse for poofters and dykes to party.

Last night's film was one of the weakest opening night movies in several years, at least in my opinion. A quick poll of friends in the audience found that it polarised people: some found it engaging and endearing, others said it was awkward, awful and boring. Each to their own, I guess.

Based on the novel of the same name by Graeme Aitken, and directed by Stewart Main, 50 WAYS OF SAYING FABULOUS is a coming-of-age story set in rural New Zealand in 1979.

Its protagonist is Billy (Andrew Patterson), an overweight and overly-imaginative 12 year old boy main whose passion in life is watching science fiction adventures and reinacting them with his tomboy cousin Lou (Harriet Beatie).

Lou loves rugby; Billy hates the game, a fact which confirms his status as an object of derision among the other local kids. The arrival of the even more awkward Roy (a gangly Jay Collins) at their small regional school changes the pecking order, and provides even Billy with someone that he can bully and belittle. Despite the tension between them, the two boys also embark on early sexual explorations together down by the creek, although neither of them know what a 'poofter' is, and accept the taunts of their peers to that effect in pained innocence. 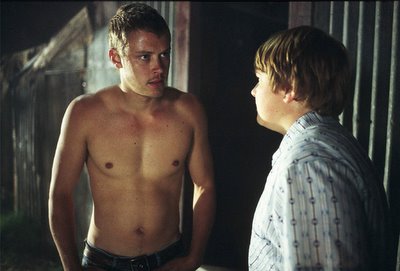 Complicating matters is another new arrival, Jamie (the charismatic Michael Dorman, pictured above with Andrew Patterson), a handsome young farmhand working for Billy's father, whose presence becomes the catalyst for tensions that disrupt the shared lives of these three almost-teens.

While 50 WAYS OF SAYING FABULOUS does have merit in its honest exploration of the sexual awakening of a young gay boy on the verge of adolesence, and is occasionally warm and affecting, its narrative is episodic, and its dramatic structure is often contrived. Too, the plodding, unimaginative direction fails to imbue the story with any real tension, although several scenes, especially those shot at night, looked superb, with evocative lighting and composition.

Had its running time been cut back to 45 minutes to an hour, this would have been a stronger film. As it was, its 90 minute duration definitely outstays its welcome. The fact that the right-hand side of the screen was out of focus for the first half of proceedings was a further distraction.
Posted by richardwatts at 1:10 pm